And just like that this post will have caught me up with the prompts for 52 Ancestors and that is making me feel pretty proud.

If you have followed me for a while you will know I am a complete novice when it comes to Irish Research. It along with Italian Research gives me a headache. I have a hard time with the naming patterns and such. I am seriously considering an Institute on it or other class on it. There must be an Irish Research class for complete idiots. Anyway back to the post I am writing instead of self-deprecating humor.

When my mother in law was alive she would talk about her family and I would listen. I actually should of been writing down her stories or recording her but I was not quite the level of genealogist as I have become. Anyway the story goes that her family immigrated to the United States in the early 20th Century from Ireland.

We are going to concentrate on the Mary Elizabeth Butler line for this post because in all actuality it fascinates me. I tend to want to research the female branches of the tree as their voices are lost a lot of the time.

The first hint I had that something was wonky with Mary Elizabeth Butler’s line was looking at the 1940 Census in Brooklyn, NY of the Peter Moran Family.

Clear as day it says Mary Moran was born in Hamilton, Ontario, Canada. Also thank you Peter and Mary for naming one of your children, Edith it made life so much easier. So Mary was born in about 1889-1891 in  Canada, but wait I thought everyone came from Ireland, what is the story here.

A quick search yielded Mary and Peter’s marriage certificate in NYC and after receiving it I had her parents names of William Butler and Mary Hurley. It was now time to see what I could find about a William and Mary Hurley in Canada.

I searched the 1891 Canada Census and found the Butler Family in Hamilton, Ontario.

According to the Census both William and Mary were Roman Catholic and were born in Ontario. Their parents were born in Ireland. Very interesting because this did not fit in with the family narrative I had, but since I did not have information on the parents. I will say it was about this time I fell in love with Canadian records and their wealth of information as this census also said that William was a GBV conductor.

Since I found the family in 1891 and their oldest child was 3 I decided to see if I could find their marriage record. 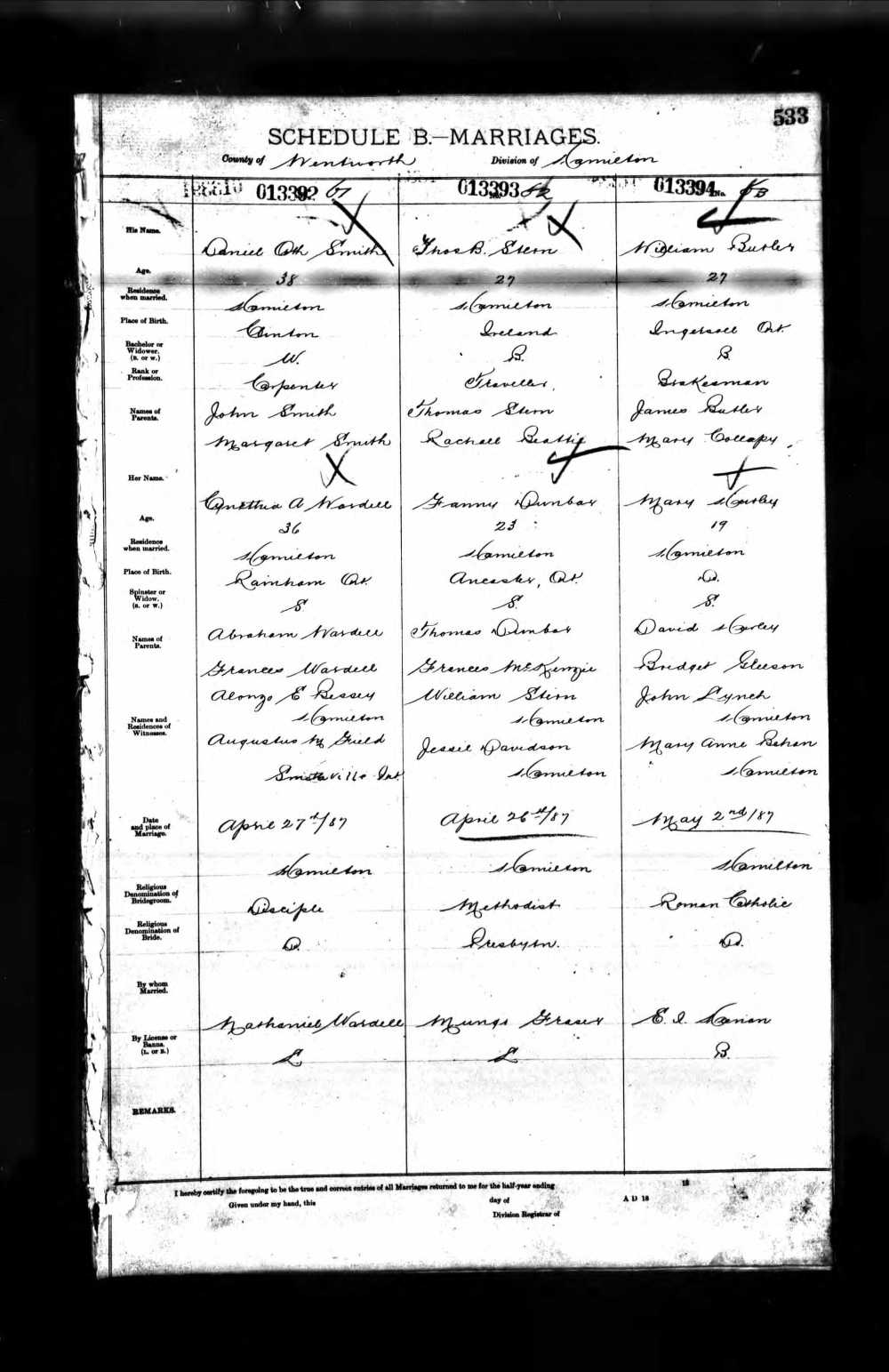 Now it is time for me to rant about how horrible New York is about getting records. IS this not the bomb. IT lists religion and parents names. Witnesses. How awesome is this.

So William Butler and Mary Hurley were both born in Ontario and married in 1887. So did Mary Elizabeth immigrate alone or did her family move together. Well I did not find the family on the 1900 US census but I did find them on the 1905 NY State Census.

According to this Census they came in 1899, what provoked them to move to the US from Canada. How many people went to Canada instead of the United States? When did their Parents immigrate to Canada?

I have yet to find the Death Certificate for Mary Elizabeth Butler Moran or even her obituary. I did find the Obituary for Peter Moran in the Brooklyn Eagle and it states he was buried in Calvary Cemetery. Which coincide with what my mother-in-law stated to me many years ago. Maybe Mary Elizabeth is buried with him and lets hope their is a stone. Guess I will try calling Calvary as the next step in the process.

I guess I also need to see what happened to Mary Hurley and William Butler when they came to New York and to see about their lives before they left Canada. I see new things on my horizon.

I am thinking a book of Research Questions and next steps in order. Along with finding how many people went to Canada before later coming to the United States.