Yesterday, I attended the annual Wreaths Across America event in Brooklyn. Since I was going to be there my sister-in-law asked me if I minded checking out her grandparents graves at Cypress Hills Cemetery no problem. She gave me her grandparents names and that they were in the Whitehead plot but she had no clue who they were and the connection beyond her Grandmother was a Whitehead.

As you know, finding a woman in your line can be difficult, as a lot of times there are no records pre-marriage.

I started my visit in the office and I was limited in time as I had to be at the National Cemetery at Noon and it was already 10:50. To my luck I was the only person in the office and gave the names of George and Sarah Behringer. Well they could not find George but found Sarah with the date of death of 2004 and in the Whitehead family plot. To my surprise the Whitehead plot was in Section 1 of the cemetery. Section one is right in the oldest part of the cemetery I would say and faces Jamaica Avenue.

My only problem was nothing was labeled until I found a newer stone with the section and grave number. I was too far back. So I wandered forward and this stone was standing before me.

This thing is huge and my mind was going a mile a minute saying please be the right family. I started walking around it, reading the names of all the people buried there were a total of 23 names including my Sister-in-laws Grandfather, George Behringer. I was at the right place.

Now the fun begins, contacting the cemetery researcher to find how many people are actually buried here, when the plot was purchased and who did it originally belong too  as there is a second name on the other side of the stone of Wilson.

After some preliminary research I believe I found her Grandmother’s Parents to be John and Elizabeth Whitehead according to a couple of census records but that has yet to be confirmed.

I am planning a trip to the municipal archives for my own research, so I am thinking of pulling the death certificates and seeing if I can go back further. 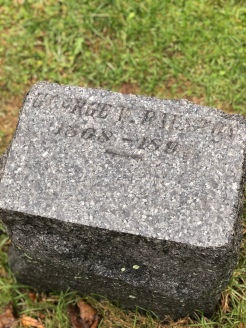 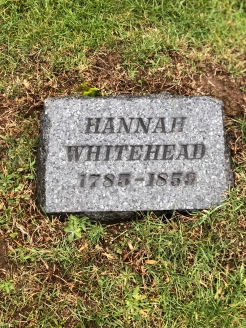 So a new puzzle and I am extremely excited to fit the pieces together.