I think this is one of my favorite prompts so far in the 52 Ancestors challenge. I love the use of family names. When I named each of my children my husband and I spent hours pouring over names. We never did use Zachary Tobias or Rebecca Lynn, neither of which has a family connection. We did instead to choose to name our children after family though I never did get to stick grandpa’s name Earl in anything.

We have a Chiara Michelle after me and my grandmother, a James Michael after both grandfathers and then we have Samantha Dawn, who shares a middle name with my Mom, along with her first initial. Going through the family there are some cool names from Leslie Winchester Beardsley and Olive Virginia Witherwax, or Lorin Nehemiah Larkin and my personal favorite Bezaleel Wood.

I did not know about Bezaleel Wood until after I submitted my application to the Daughters of the American Revolution under Lorin Larkin. I was visiting a Facebook group in 2016 and they said to look for other patriots through spouses and children. Lo and behold I found Bezaleel Wood, my 5th great-grandfather.

Bezaleel Wood was born 10 September 1758 in Lunenburg, Massachusetts to Jonathan Wood and his second wife Sarah Gary. He is named after an older brother who died in 1756. (Let me just say that naming your kid after a child who died is creepy. Yeah, I know it was a common practice but I still find it creepy.)

Bezaleel married Mehetabel Darby in 1778. They had 2 daughters that I have proven Sarah, my 4th great-grandmother who married John Larkin and Mary, who married Thomas Haynes. There may have been 2 other children (Eleazer and Elizabeth but I have not proven them to date).

After the American Revolution where Bezaleel served under Captain Joseph Bellows, the family relocated to Plattsburgh, Clinton County, NY where he lived until he died on 25 February 1818.

Bezaleel and Mehetabel Wood are buried in the Baker Cemetery off of Route 3 in Clinton County. I am happy to have discovered this ancestor and will keep learning more about him. 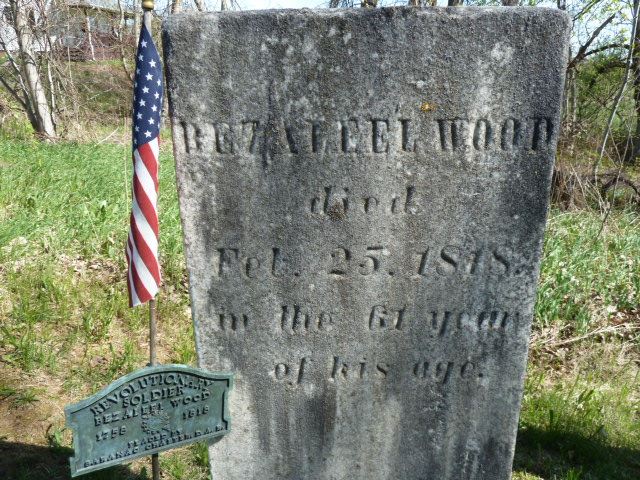 (photo courtesy of Find A Grave)

One thought on “52 Ancestors – Favorite Name”